We woke up to the stunning beauty of Telluride…really a beautiful town. Well rested and after eating a nice breakfast, it was time to head out for today’s adventure. Today’s fun was something I have been looking forward to all year. Those of you that remember my Moab trip will remember that I only did Moab because all the trails I wanted to run in Colorado were still closed in May. Granted, I’m glad I went to Moab, but I have been wanting to run Imogene pass since I first learned about it. Barely able to keep my composure from excitement, we fueled up and headed out.

The beginning on the trail (it can be run both ways, but it’s usually better to start in Telluride…the other end is Ouray, another amazing town) starts out in a communal driveway.

After you pass all the residences and leave the communal driveway, you are deep inside the forest, inside the tree line, and the bugs are biblical. Flies everwhere!!! After about a mile, you begin to gradually climb.

Imogene pass is the second highest drivable trail in Colorado. Mosquito pass is the first. Imogene tops out at 13,114 feet!

As you continue the climb, the shelf roads begin. There are parts of it where the tires will literally be inches from the edge (depending on your vehicle and axle stance)…for me it wasn’t an issue, as I don’t mind shelf roads, by the wife started to get nervous. If you are trying to ease someone into the Jeeping lifestyle, this is NOT the way to do it.

You can see how much room you have for error…and this is an “easy” section.

The climb to the top of Imogene pass is rather mild. A good 4×4 with low range and a decent set of tires will get up there.  The route from Telluride to Ouray means that you climb up the easier side (the Telluride side) and descend down the Ouray side (more difficult and rocky)…doing the trip in reverse is of course possible, but ill advised. One of the major rules of these trails is (some exceptions apply, depending on circumstances) uphill traffic has the right of way.  The ascent starts with a rocky road, but nothing of note. Pictures unfortunately don’t do the surface justice…it looks like a parking lot on the photos and videos, but I assure you, it isn’t. I saw two other SUVs (a Tiguan and a Rav4) turn around after they popped their tires. The rocks are sharp!

The shelf road begins approximately 1.5 miles into the trail 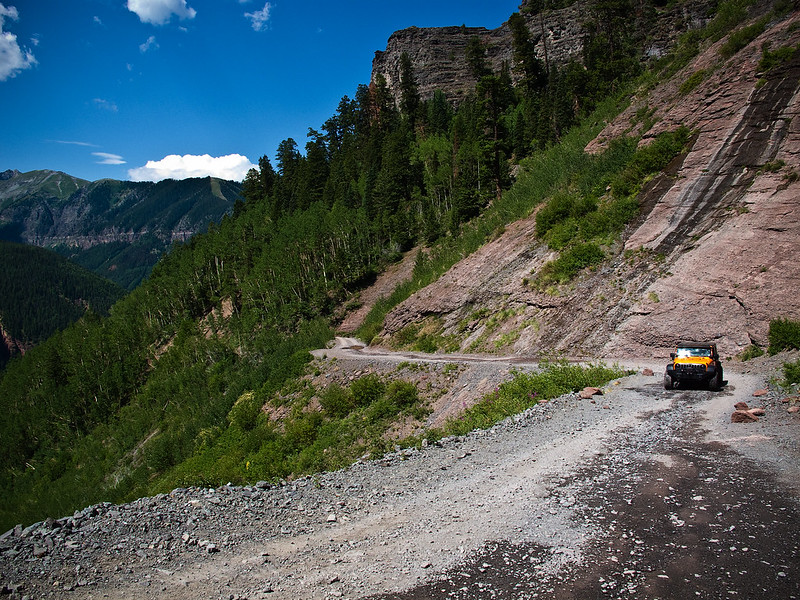 Passing is now much more difficult, especially if the other vehicle is less rugged and can’t climb up on the bank. 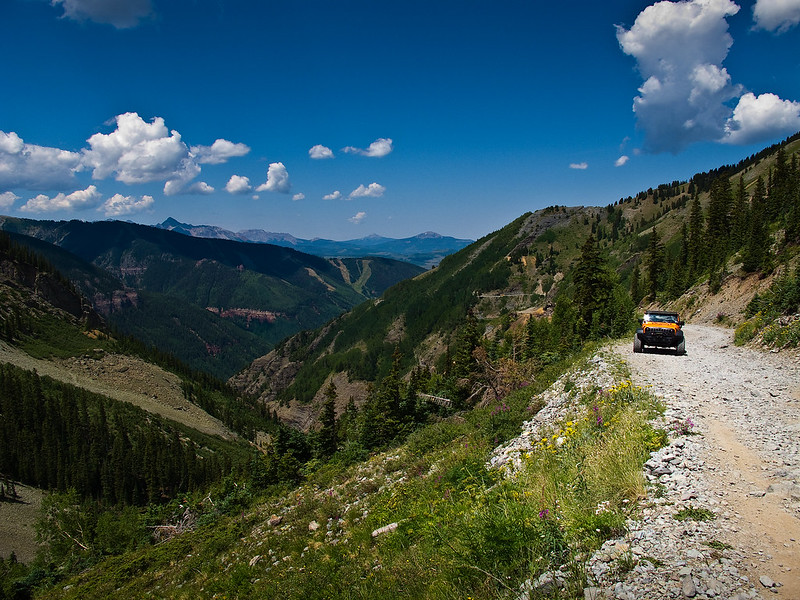 Close to the edge

After another mile or so, you come to a “tunnel”….obviously there is no room to pass, so someone needs to get out and check if any traffic is coming.

Whenever you are on a trail (or a road) with blind curves, it is always good practice to give an audible signal that “someone is coming” by beeping your horn twice.

Looking across the valley you can see the switchbacks of the infamous black bear pass.

After a minor climb, the trail levels out for a bit, so you can catch a breather.

Once you get to the disused mine, it starts to get rocky and steeper again.

Coming up to the mine

We arrived at a little pull off (passing is dangerous and often impossible on Imogene, so you must look and think ahead, otherwise backing up would really pucker up your behind) which had the remains of the old Tomboy mine. A few creeks flowing nearby, in case you want to wash up or maybe grab some drinking water….so long as you have some method of sterilizing your water…but many drink straight from the creek.  Alpine creeks are generally safe, but good practice should still dictate that unless you absolutely must, purify it.

At some points, the trail gets rockier and tippy in spots. This is a mindscrew. Trust your vehicle and don’t panic.

After another mile or so, you are above the treeline, and things start to get much more rocky. 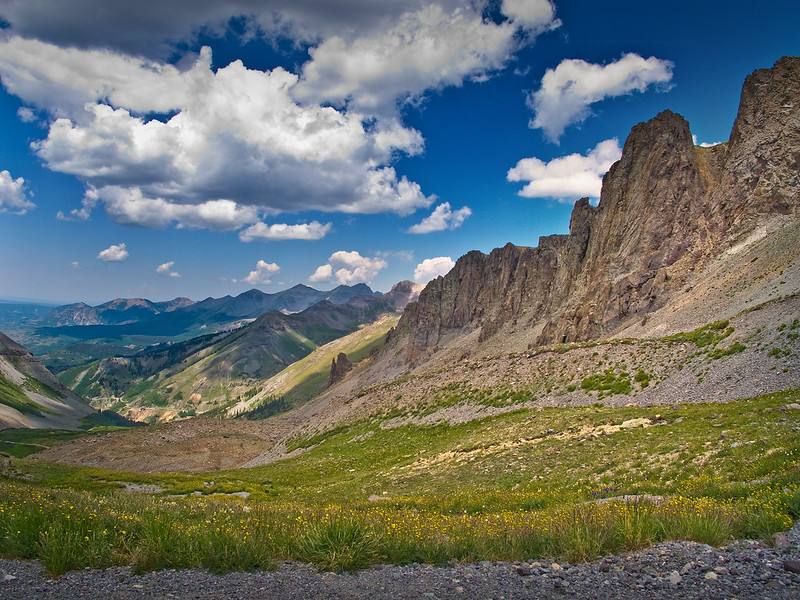 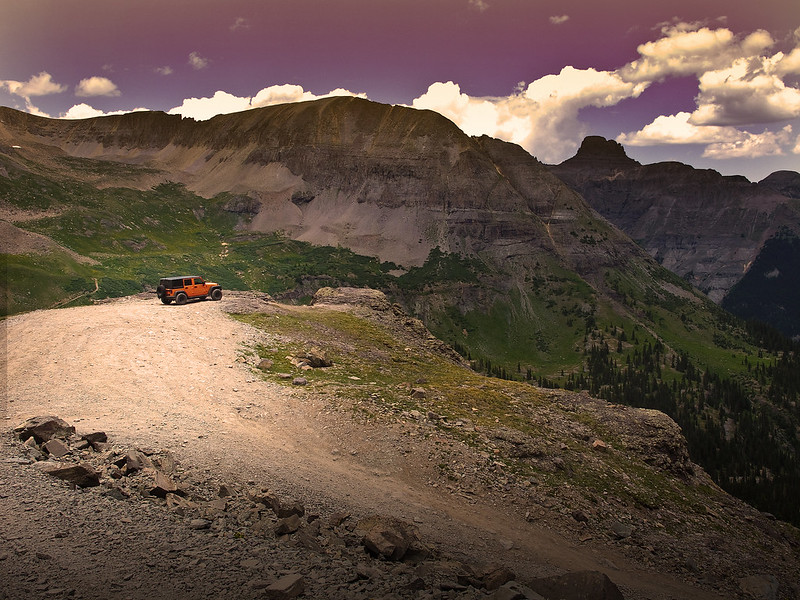 There is no reset button…one wrong move, and it’s game over.

There are many instances where you can’t see the ground. If you don’t have a spotter, sometimes hanging out the window to make sure your tires stay on the ground is a necessity.

At a certain point, you will be completely above the vegetation line. I suspect this has something to do with the temps and the lack of oxygen, but Im not botanist.

We can see the summit!!!

As we got near the summit (11,500 feet or so) it became really rocky, steep, and narrow. At one point, I had to stop and help a guy on a BMW bike to turn around. I met him at the base, and he didn’t realize how steep it was, and ended up smoking his clutch. He had a long way to go (he was doing a roadtrip to Oregon) and didn’t want to kill it completely. He was unable to turn it around alone because everytime he tried, the bike kept tipping over. After helping him (man was he happy to see me,) we have finally reached the peak, and what a magnificent view.  The clouds are so close you can almost touch them. Arriving from sea level just a few days ago, being at 13000+ft gave breathtaking a new meaning. Breathing was not an issue until I tried doing something. Lifting the camera bag made me breathe harder and I was easily winded. Luckily I didn’t have any other symptoms, like headaches, but we didn’t linger here for too long. We had a rocky descent into Ouray ahead of us.

Now it was time to descend. The descent is mentally easier because you can see where you are going…climbing always puckers the cheeks because you often are looking at nothing but sky. There were a few holy moly spots where the wife grabbed the Jeep’s “oh sh!t” bar and was REALLY nervous…so, down we go!

At first things weren’t too bad. I have read that the Ouray side is worse than the Telluride side, but things “seemed” ok…at first….

Thankfully the Jeep has hill descent control, which makes your life a LOT easier, letting you concentrate on other things, like not tipping over and taking a 5000 foot tumble down the side of a mountain. Things started to get tippy and off-camber.

After the first few switchbacks, I realized why they said the Ouray side was more difficult…it was a lot rockier, and the rocks are all loose…not something you want to feel/see on a shelf road! 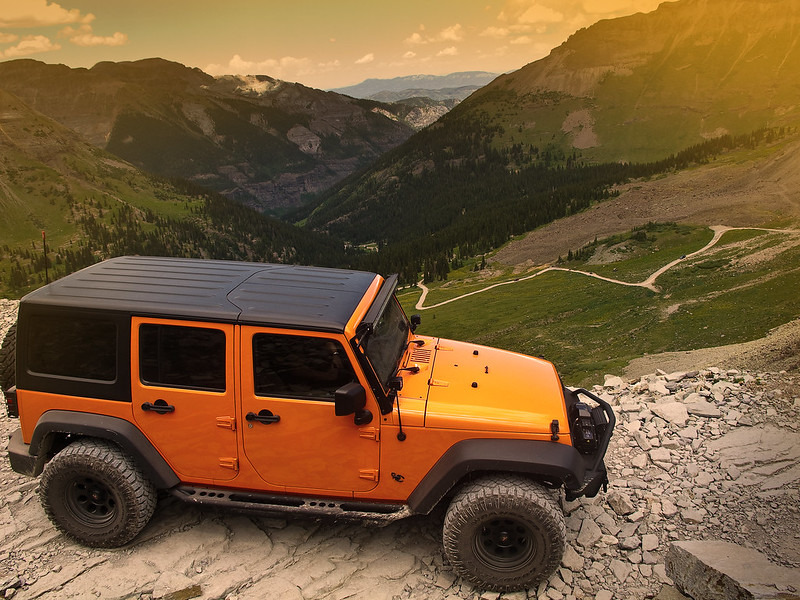 Although the photos don’t show it, this slope is about 35-40 degrees. The wife ran down to take this picture, but was unable to stop and literally slid on her a$$. I saw a few rigs (mostly rental Jeeps) riding their brakes for this descent. At the next pulloff, I had to tell them that if they want to live to see another day, to stop using their brakes and start using the low gear crawling and hill descent control.

So, still descending the mountain, I saw that it was still a LONG way down. 13 miles never felt so long.

As you descend the mountain back into the vegetation, the wildflower bloom was incredible. All different colors, as far as the eye can see. 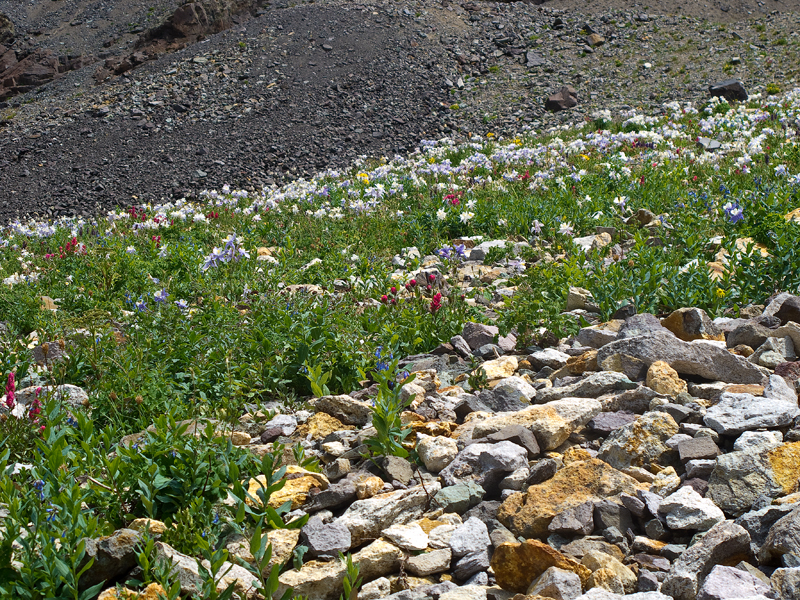 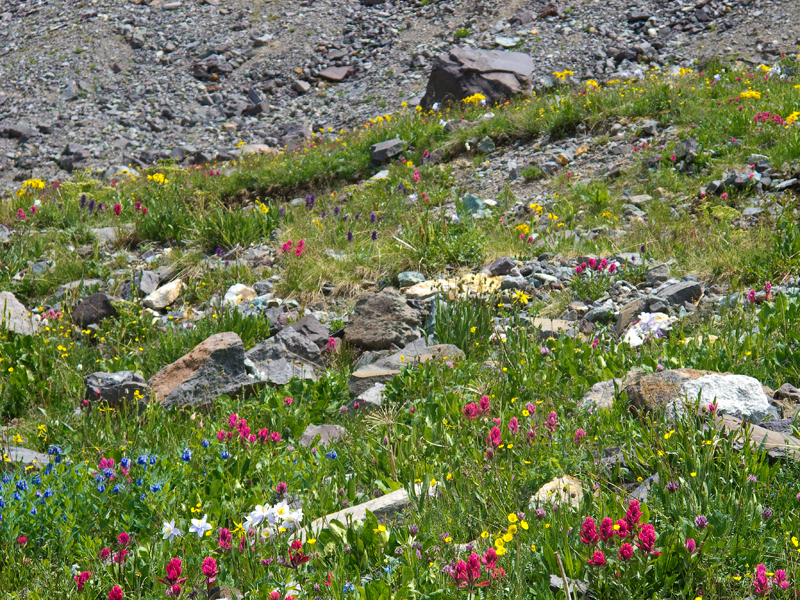 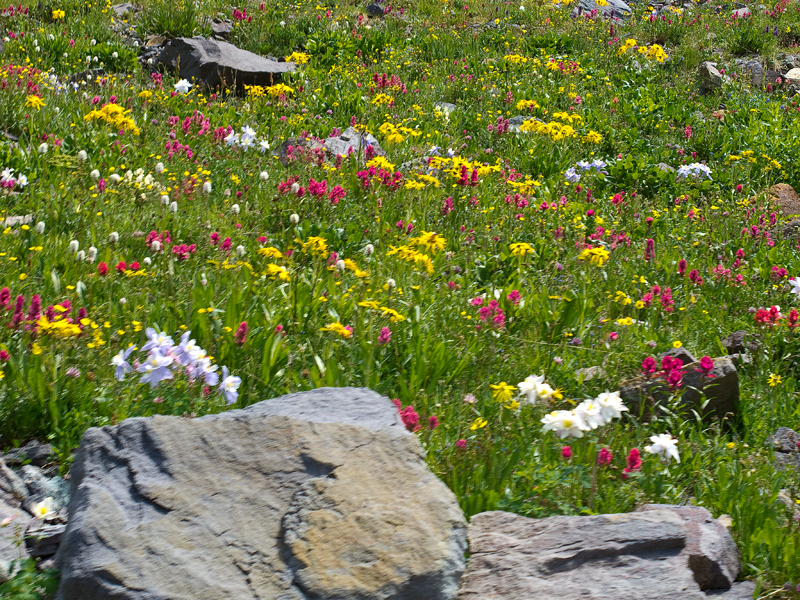 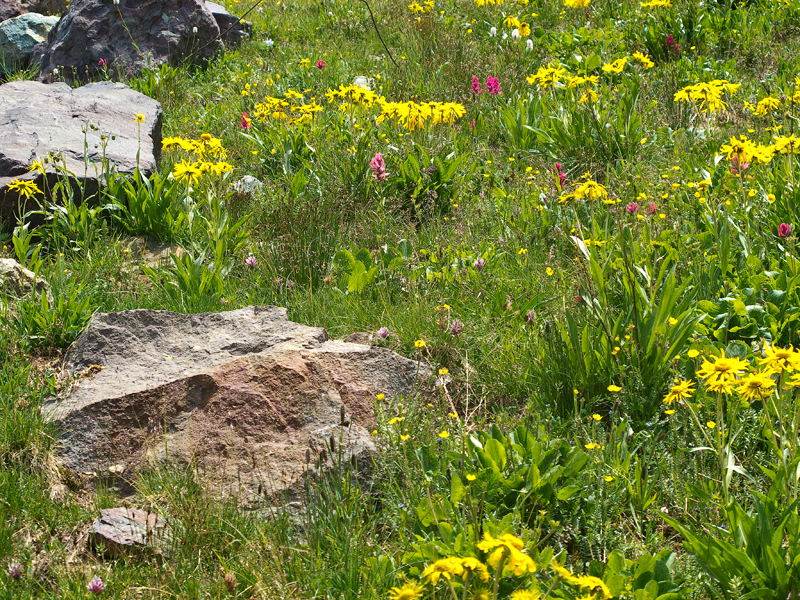 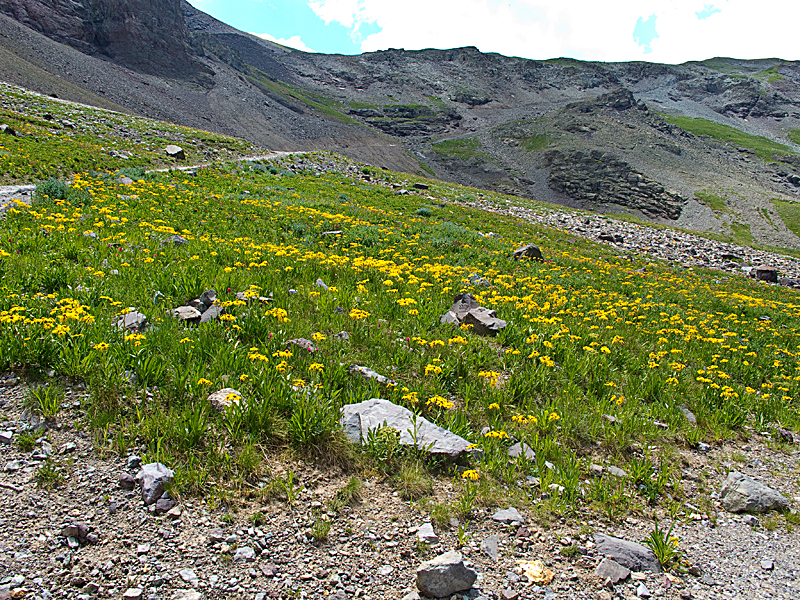 Pulled over to take a few more gratuitous Jeep ads… 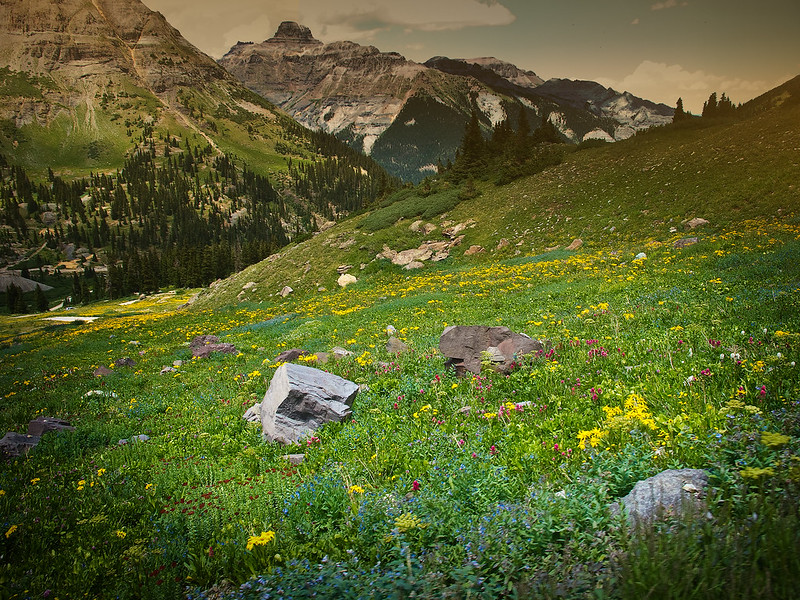 Finally, after making it back down to the treeline, we were almost home free, just a few minor water crossings to go through…

As we got closer to the bottom, we see some commotion up ahead…somehow, the driver of this buggy managed to slip one wheel off and was dangling over the drink…

We finally arrived in Ouray, and what a beautiful town it is. It is known as the Switzerland of America.

After grabbing some late lunch, we decided to head back to Telluride (Imogene took nearly 7 hours with all the stops) for dinner and an early bedtime because tomorrow would be even more action packed than today. We decided to leave on paved roads to save some time. The distance from Ouray to Telluride is about 50 miles or so. The first 25 of them are tarmac. You then have a choice. You can finish the other 25 on tarmac as well, or make a left into the Last Dollar Road. This isn’t a difficult trail or anything, more of a dirt road, but it’s supremely pretty, passing by lots of ranches, mountains, etc. I quickly chose to hit the dirt.

The road is suitable for any vehicle, but I can’t imagine it would be too comfortable.

It was just nice and peaceful to take this route rather than a highway route. Being alone, no traffic, no cares, quite relaxing.