After the buttclenching events from the previous night, we woke up with new vigor and were excited to continue the adventure. Before visiting Moab, I really wanted to stop in Colorado and run the trails outside the town of Ouray (Imogene pass, black bear pass, etc) but unfortunately those trails are closed through August due to massive snow, but my desire to hit a high mountain pass remained…luckily, just outside Moab reside the La Sal Mountains (pictured in the background of the delicate arch photo above) and La Sal Pass takes us all the way to the top of them (almost) at 10,500 feet. So, excited, we set out on our little adventure.

We initially missed the turn and drove too far, and ran into a place called the hole in the rock….

I have been here a few years earlier with the wife, but I figured my friend would enjoy the tour and the history of this attraction.  This was originally a diner/truck stop during the times of the uranium craze in the Moab area, but was later turned into a private home of the couple that owned it…they blasted a 5000 square foot home into the rock, and the engineering in there is incredible. Perfect 65-72 degrees year round, fireplace, etc etc etc. I won’t give too much away in case you guys ever make it out there, the tour is only $6 and is very interesting, and if you are interested, the place is for sale as well.

After the tour, we ventured back towards the La Sal Mountains in search of the La Sal pass. Now, the 4WD guidebook I was using recommended I do not run this pass in the wet, but my stupid thought process was “this book isn’t written for Jeeps, but for everyone, which includes 4wd subarus, X3s, etc…my Jeep will be fine.”

So, we found the road, and ventured in…starting at 4000ft or so.

The pass started off a 4 out of 10, with lots of rocks and portions of it were shelf roads. I was praying that my tires will hold up and not puncture…those rocks were REALLY sharp. Luckily, I was spared the pain of getting a flat tire on that pass. So, onwards…driving up this steep shelf road, I got an uneasy feeling, like I shouldn’t be doing this….but my stupid self kept going. At around 6K feet, we begin to see signs of snow, but it was the remnants of the winter snow…or so we thought, and only splotches of it scattered around….no big deal. Now the rain has started to pick up, and the road was getting muddy. The Jeep started dancing and sliding when coming off from taller rocks, but nothing to be concerned with on this 6000 foot high shelf road right?

Once we crossed 7000 feet, it began to snow. It caught me off guard because remember, it was 82 degrees at the bottom, but again, I kept going. At about 8000 feet, it was starting to get worse…now there was actual snow on the ground….

It didn’t look too bad, and I kept at it, trying to reach the summit. Determined, onwards I went….at 8500 feet, I could no longer see the trail, it was snow covered completely with about 6″ of snow. The trail also had a number of splits where I went the wrong way and ended up on a dead end, having to back up back to the split (not fun.) Finally, after another hour or so, I reached a very steep hill at 9200 feet right past a snow melt creek…..after crossing the creek, my front axle immediately sunk into the snow…for those that read my Canada winter Jeep thread, getting buried there, I learned that feeling and knew immediately that if I cross this creek I’m going to be SOL. It was the off season for this pass and the chance of someone else coming up there would be zero. I got out of the Jeep to survey the situation, stepped right into a freezing cold creek, and saw that the snow on the other side of the creek was 3 feet deep…coupled with a damn near 40 degree slope, I knew it wasn’t going to happen and there is no chance I could get to the summit. I finally made the call to give it up and turn back. Sadly I don’t have photos of this, since we were really calculating our options and discussing our strategy of turning back (which was a feat all on it’s own since the trail was only 1 car wide.)
Lesson of the day….take the hint…some things just are meant to be left for another time. I gambled, and didnt lose, but it was a stupid gamble, and not one I would risk again. Fun? Absolutely. Dangerous and stupid? You bet your ass.

We then decided to come down the mountain, and try another pass (geyser pass) which was the easier side of the mountain, so we began our climb down….

Jeep looked pretty muddy after this descent, and we were essentially trying to climb to the peak of those mountains. Geyser pass didn’t turn out to be much better. Although the road was MUCH easier and fun, it was still pretty covered in snow.

Not wanting to deal with the La Sal pass conditions, we turned around and headed back to Moab. It was now getting late, so we decided to grab dinner, and call it an early night, hoping for a more fulfilling and less stressful day tomorrow….

Since our location (cabin) was very close to Gemini Bridges, I decided to swing by and check them out. It was a pretty quick drive there, but the views are amazing. We stumbled across a few other Jeepers there, but this was one of the few times we encountered anyone else on the trail with us. Now the Gemini bridges have a reputation for stupidity. These are basically two “bridges” and there is a gap between them about 5-6 feet long. Many idiots try and jump the gap, except there isn’t much to catch you on the other side, so numerous people have fallen to their deaths here. 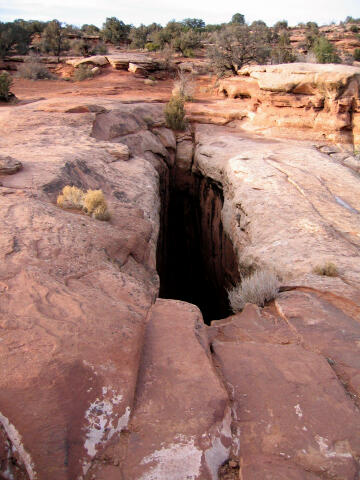 Gap between the two bridges (not my photo)