Wanderings of The West

We get up the next morning, and I am very eager to start the day, because today I would try a trail again that shut me down the last time I was there….Top of The World. This trail is rated difficult in the guidebook, and when I was there last, my Jeep on 33s probably could have made it, but I didn’t want to take chances because it is very remote and I was alone. This time, the jeep is bigger and badder, so with lots of excitement, we head on for the 30 mile drive to the trailhead.

Luckily, the drive isn’t a bad one…..

Now, a message to anyone else that might consider a road trip with passengers sometime in their lives, rule #1 to make things fun for everyone….REMEMBER THAT BEING A DRIVER AND A PASSENGER IS NOT THE SAME THING. Driving your M3 on the Dragon or your Jeep on Hells Revenge might be fun for you, but it is literally torture for a passenger.

With that in mind, and trying to teach the wife about 4 wheeling, my plan was to let her do and drive as far as possible before things get frisky, at which point we would swap.

Now, the trail is 9.6 miles long according to the guidebook. The first 5 miles are moderate ….then around 3 miles of difficult stuff, then 1.6 miles of hard stuff….keep those numbers in mind.

So the wife is tootin’ along, and I am walking alongside giving her instructions, like where to turn, what line to take, and what gear to be in (1st or 2nd in 4LO) 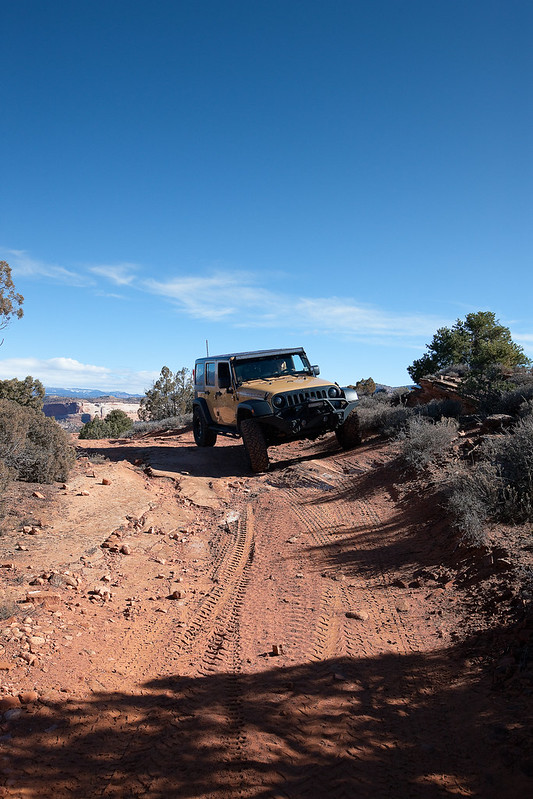 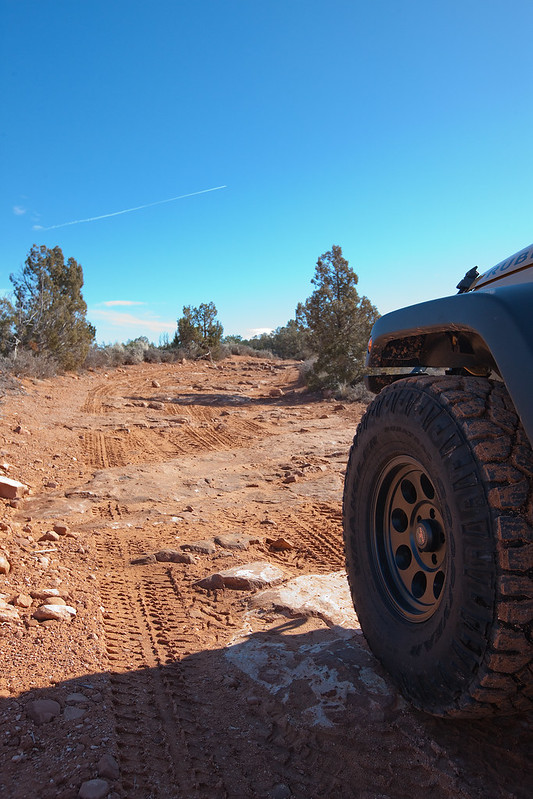 Once the wife hit about the 6 mile mark, things started getting tippy and slippy, and the wife was no longer comfortable, so we swapped…. 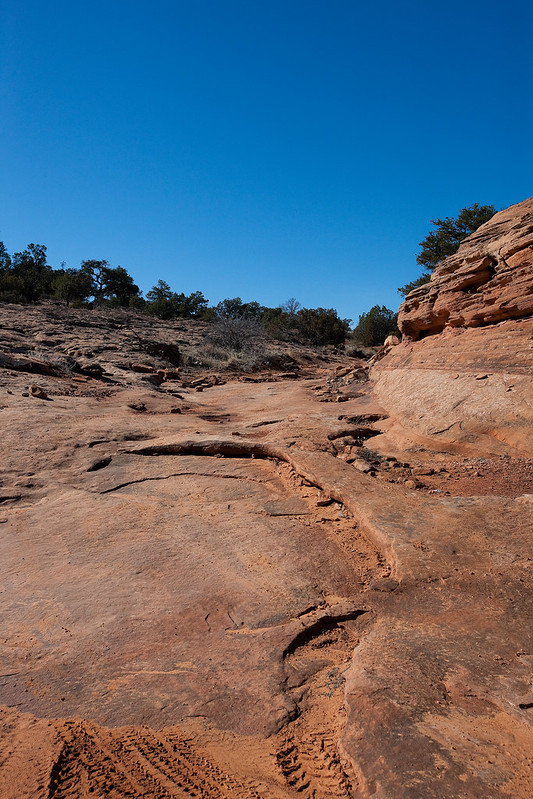 I know you can’t tell, but ask anyone that has ever been offroading, it never comes across in pictures.

As we climbed higher, we began seeing signs of snow…to which I am very “alert” thanks to my misadventures on La Sal pass 2 years ago….

At about 8 miles, things got difficult AND the slopes were covered in ice (flatter areas seemed to have melted the ice off)

As luck would have it, it did get worse, but I kept on going so long as the Jeep didn’t struggle or fight too much….

The wife started to get nervous because every time I climbed a ledge the jeep would slip 2-3 feet to either side, which was fine, but watching a 5500lb box slide around and make banging noises is a bit nerve-tingling for someone that spent their entire lives trying to avoid that sound.

As we got even higher, the terrain became even more difficult, and the ice was even thicker. This trail is supposed to be around 4-5 hours total, and we have used nearly 3.5 already, and haven’t even reached the end, plus the return trip….on top of that, it was already around 3:15, and the sun sets (like a light switch) at 5:40, so we would need to do some of the return trip in the dark……so at 9.2 out of 9.6 miles, I had to swallow my pride and ego and turn around. Had I had another jeep with me, I would have done it without even thinking, but being out there alone, with literally no cars around for 50 miles (Moab was dead during this time)…..I had to do it. Sometimes you have to do the smart thing, no matter how much it pains you to do it

So after my unsuccessful attempt to get to the top of “Top of the World”, it was time to turn around and head back (all sad and frustrated).

This entire time, we have been pretty hungry as our plan was simply to find a nice spot at the end of the trail and admire the view while we cook lunch, but since that didn’t happen we were jonesing to eat, however, it was already after 4pm and we had a long way back off the rocks before it got dark so starving and munching on leftover road trip candy, we made our way back to the head of the trail……which was FAR away at this point

Being frustrated and agitated (combination of not making the end of the trail, being hungry and having recently quit smoking after a pack a day for 14 years) I barreled down the trail in half the time as it took getting up….looking back, it was a mistake as there were a few mistakes I have made, luckily, nothing broke, bent, or snapped.

It was around 5:10 or so, and we made it back to the trail head, where we decided to pull over and cook up some “lunch”…LInner at this point.

Wife and I were tired of eating restaurant food and road trip stop food, so before we headed out, I stocked up on some fresh local rainbow trout to grill up later on, and some salad….nice not to eat so heavy for once.

FInally got to put my tray table/cutting board to use, came out VERY handy.

After an early supper, it was getting pretty dark, so we packed up, and began the 30 mile drive back to town. Overall, it was a fun filled but a slightly disappointing day, but as they say, you live to fight another day.